Skip to content
01943 875050
View Full Pictures
Tranmere Park Primary School
General : A winner is crowned. The trophy has been lifted…

A winner is crowned. The trophy has been lifted…

Our Tranmere Park TTR Champions League has now officially ended. And, what a tournament it was.

Below, I have accumulated a list of mind-blowing statistics that demonstrate just how passionate, diligent and, let’s be honest, competitive, our learning community is. These are statistics to be seriously proud of:

– A grand total of 2,450,166 points accumulated across the last 8 weeks.
– 46 children who now have ‘Rock Hero’ status – this means they are scoring more than 60 correct answers in a minute! Less than one per second.
– A new leader at the top of our school leaderboard (Oliver Casey) with a speed of 0.47 (that’s answering more than two per second on average).
– Two boys in Year 4 who are now also answering 2 questions per second – Oscar Whitaker and Oscar DeBiase.
– Our all time school average speed has dropped to 3.64 – what a phenomenal effort that is.
– More importantly, our average speed, across the last 8 weeks, is 2.24 (no wonder we rose to top of the league)
– 14m and 30 seconds, on average, played each day.
– 92% accuracy.
– 79.2% participation across school – wow.
– 2,529,041 correct answers
– 55,705 collective minutes spent on the learning of our tables – that’s 928 hours!

A set of statistics that boggle my mind. Take a bow, Team Tranmere.

Now, if you are the type of person who likes statistics, I have attached the final league table and a graph to show how many correct/incorrect answers we secured over the course of our tournament (56 days). My graph covers the last 100 days – see if you can spot when the tournament began at the beginning of lockdown (January 11th), and, when it was half-term.

What a herculean effort it was from our Year 2s, but, in the end, our Year 6s (and I can tell you they were seriously worried!) were victorious. Having given our Year 2s a sporting round of applause that was soaked in relief, they celebrated wildly. See the attached photo to share in their joy.

Thank you all, once again, for making this tournament so exciting. Keep your eyes peeled for it to start all over again in the near future and keep on practising. 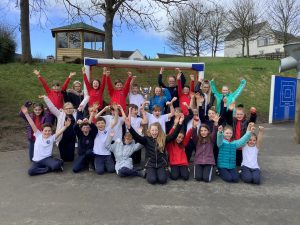